Mercer | US Election: What's Next for Investors

Mercer | US Election: What's Next for Investors

US voters went to the polls on November 8 and elected Donald Trump as the next President. With the lack of clarity surrounding policy details, markets must wrestle with the uncertainty of what a Trump administration will look like. Nevertheless, investors should resist the temptation to overreact to the election. Political developments will be just one factor that drives markets in the coming months and years.

We suspect downside risks are higher under a Trump presidency, but it’s also important to note aspects of Trump’s policies that would be welcomed by markets. Furthermore, checks and balances in the US political system should prevent extreme policies. Specifically, congressional Republicans are not likely to give Trump a blank check. Trump’s candidacy has exposed divisions within the Republican Party. Victory will probably help to smooth over some of the tensions, but Trump is likely to face opposition from his own party on some parts of his agenda.

We wouldn’t be surprised to see volatility remain elevated over the coming months as the market tries to discount potential policy changes. Trump’s appointments to key cabinet posts will be an initial signal of the direction of his administration. Although most market commentators have tended to focus on the risks of a Trump administration, there are aspects of his agenda that could be viewed favorably by markets. He has expressed support for tax cuts, tax reform, a reduction in regulation and increased infrastructure spending. Should the economy falter, he will also be in position to push fiscal stimulus through Congress, which would have been a challenge for Clinton with a Republican House. However, Trump’s tax plans as presented would dramatically reduce government revenues and increase deficits. This could put upward pressure on inflation and interest rates. Trade policy will be a key area to watch in the coming months, and emerging market economies have the most to lose from aggressive trade measures.

The election aside, markets have been agitated for some time now, and many analysts have suggested that a pull-back for equities is overdue given the current valuations in a slow-growth environment. The next administration will have to face a challenging economic landscape: tepid growth, deficits, financial markets held aloft by ultra-loose monetary policy, and the process of initiating interest rate normalization. 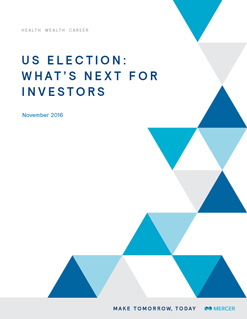 Trump’s policies have been difficult to distill, but most interpretations have a few short and long term implications:

Implications of the US Presidential Election

Insights on the health, wealth and career policy implications for employers and their employees.