The Global Potential of Growth Economies and Emerging Markets

The shift in economic power from the West to the East and South is well underway. But not all boats will be lifted by this rising tide. Organizations in growth economies will need to embrace technology and the transition to a service economy if they hope to be globally competitive.

Although the economic story of the twenty-first century is still very young, its first two decades can arguably be summarized as a period of transition in global economic leadership. The North-Atlantic-centric economies that have dominated the global economic landscape for the better part of the past century and a half are handing the baton off to the faster-growing or “emerging” economies of Asia, Latin America and Africa. By the end of the third decade of the century, the transition will likely be complete, with the anchors of global economic growth cast across the Pacific and the Southern Hemisphere.

With an ever-larger and increasingly educated middle class, particularly in Asia and Latin America, growth in consumption and business investment in these regions will not only lead the way as the engines of global economic activity but will contribute to a gradual transition toward higher-end consumer goods and business services, such as healthcare, insurance and investments.

Since 2008 and the peak of the financial crises, faster growing economies have dominated new economic activities globally. According to estimates from the World Bank, the global economy has added US$10.655 trillion to its GDP during this period, of which roughly US$8.28 trillion — or more than 77% — have come from the faster-growing economies. Since the beginning of the century, nearly 65% of all new activity has occurred in these economies, which, as of the end of 2015, represent slightly more than 42% of the global economy, up from almost 30% at the end of 2000. 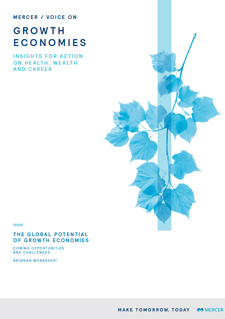 The Global Potential of Growth Economies 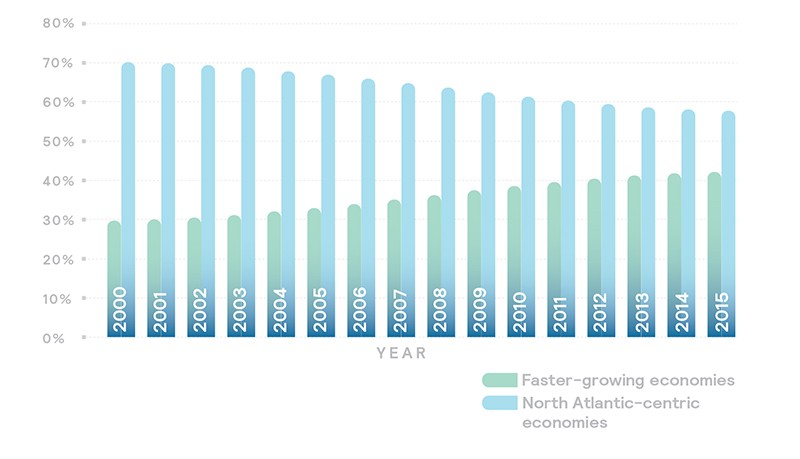 The North-Atlantic-centric economies have benefited greatly from their consumers’ size and growth over the past half century. As the transition in global leadership progresses over the coming decades, the faster-growing economies of Asia and Latin America, in particular, will begin to experience this stabilizing economic force as their investment in the infrastructure of consumption begins to pay off.

About Mercer/Voice on Growth Economies

Mercer/Voice on Growth Economies, published in Spring 2017, gathers insights on the current trends and challenges facing HR and finance leaders at organizations across Latin America, Asia, the Middle East and Africa. Mercer’s consultants and subject matter experts offer insights and case studies on how growth economies organizations can further the health, wealth and careers of their employees while growing into the future.

Read more
Fill out the form to access the full article.
*Obligatoriske felt