To what extent has exchange-rate fluctuation affected the value of common currencies over the past five years? What pay benchmarking challenges arise because of this fluctuation? What tactics can mitigate the challenges?

Among the economic headwinds confronting compensation professionals at multinational corporations, one of the most consequential in recent years is depreciation (or appreciation) of the home currency vis-àvis other currencies that may be used for compensation benchmarking. Before addressing issues of multiple currencies, it is important to identify the benchmark currency. To illustrate the impact of exchange movements on benchmarking results, let us assume there are no year-over-year changes to pay levels at your company vis-à-vis your benchmarking comparators.

This issue of Perspectives explores the problems that arise from currency volatility with respect to pay benchmarking — specifically in connection with proxy comparisons, although challenges may also arise from using compensation surveys denominated in a foreign currency.

Exhibit 1 illustrates levels of fluctuation for five currencies relative to the US dollar over a five-year period, from June 30, 2011, to June 30, 2016. 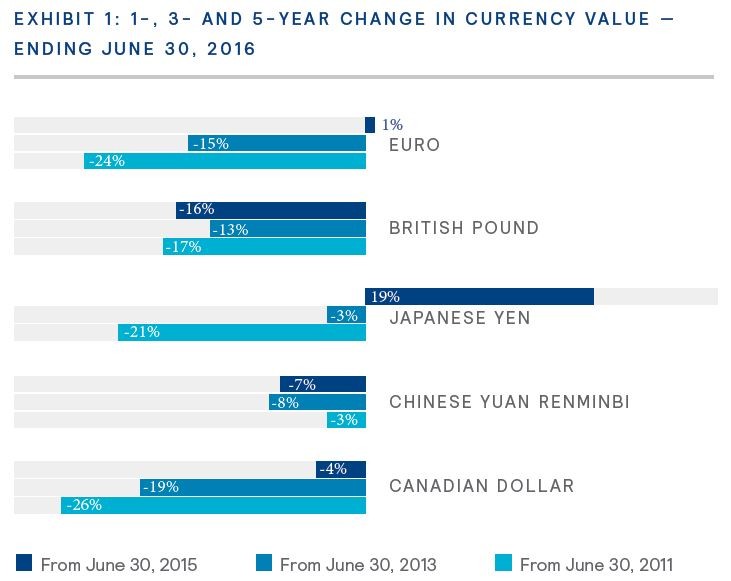 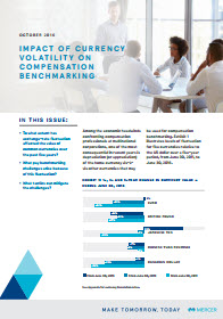 Get the full paper

Download
Download PDF
Please fill in your details below to get the full "Impact of Currency Volatility" white paper.
*Obligatoriske felt