A Point of View

By Gail Greenfield and Brian Levine

Pay equity — the notion that pay levels should be equitable for all employees regardless of their demographic background — is top of mind for many executives. In fact, interest in this topic has reached new levels, as exemplified in recent efforts by large organizations, particularly in the technology sector, to publicly discuss and disclose their achievement on pay equity (e.g., the difference between women and men in term of cents on the dollar) and existing processes.

Investors are pressing for this information—where last year the focus was on technology companies, this year the pressure is on financial services—and leading companies are looking to get out ahead of such demands.

Globally, organizations face escalating pressures, from new reporting requirements in the UK to the possibility of proactive analyses in Germany to continued regulatory focus throughout the European Union and in Australia. Moreover, in the US, state legislators have launched a series of efforts to monitor and regulate comparative pay levels and to limit the ability of organizations to set starting pay based upon rates from prior employers. 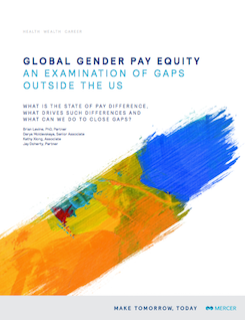 Mercer’s new research paper analyzes data and reports on the state of pay equity in 11 countries.

Although regulatory and cultural pressures have played a role in focusing executives on this topic, organizations globally have strategic reasons to be concerned. For example, consumer product companies have realized that their products may not optimally serve all of their customers if product developers are predominately white men. Business needs, combined with regulatory and societal pressures, have led organizations to evaluate the processes they use to pay employees and also the approaches they use to attract, retain and motivate a diverse workforce. Workforce analytics plays a key role in such evaluation.

While the World Economic Forum projects in its 2016 Global Gender Gap report that it will take 170 years to eliminate broad opportunity gaps between men and women (up from an estimated 118 years reported in 2015), our When Women Thrive Businesses Thrive research demonstrates that a focus on within-role pay equity can help companies make significant progress in building diversity — and employers can close such pay equity gaps. In this overview, we discuss some of the recent regulatory changes and then provide proactive steps you can take to ensure equitable pay among your employees. Although the discussion focuses on the US and the UK, similar approaches can be deployed in other countries to address regulations and to understand and eliminate pay gaps. We advocate a global focus on this issue.

Ready to get started?

Recent pay equity regulatory activity in the US

In contrast, we anticipate that the Trump administration will defer to states on the issue of pay equity. On that front, we expect individual states to continue to enact equal pay laws to help close the pay gap between men and women, similar to recent laws enacted in California, New York, Massachusetts and Maryland.

The California Fair Pay Act of 2015 is considered the most aggressive equal pay law in the US. To understand this, consider the key reason it is generally difficult for plaintiffs to win pay equity court cases: many organizations have hundreds of job titles, each with its own job description. Defendants often argue that pay levels are unique by job, making it difficult to establish a meaningful employee pool for pay comparisons. Statistics to detect pay differences require a fairly large number of employees within a pool, making a strategy of employee “fragmentation” a successful defense strategy.

Listen to May 4th "Gender Pay Equity: A Global Examination of Barriers" Webinar

The California Fair Pay Act has quite a few provisions, but the key one—in our view—addresses the point above. The definition of a relevant employee pool for comparison has been broadened to include employees performing substantially similar work based on a composite of skill, effort and responsibility that is performed under similar working conditions. No longer can analyses be conducted only at the level of the job and for employees working at the same establishment. While the original law covered only gender-based pay differences, the principles of the Act were recently expanded to cover race- and ethnicity-based pay differences. Moreover, as of the beginning of 2017, prior salary cannot be used to justify a gap in wages between men and women. These recent actions demonstrate that pay equity is a key concern in the state. Employers with workers in California are advised to assess their pay equity situation to be prepared.

Other US states have drafted their own laws to advance gender pay equity. New York amended its equal pay law (Labor Law Section 194) effective January 1, 2016. Similar to the California law, it broadens the potential basis of comparison—to cross both jobs and geographies. In both states, employers can no longer justify pay discrepancies by relying on “any factor other than gender.” The new provisions clearly state that any factor used to justify pay differences must be job-related—examples outlined in the New York law include education, training and experience. The burden is now on the employer to explain pay gaps using legitimate business reasons.

Massachusetts also recently enacted an aggressive gender equity law (Massachusetts Equal Pay Act) that goes into effect on July 1, 2018. Similar to the California law, the law prohibits pay differences for substantially similar work performed under similar working conditions. Moreover, the law includes a provision that employers are not permitted to ask prospective employees about their compensation history during the application process.

Lastly, Maryland amended its Equal Pay for Equal Work Act. The changes went into effect on October 1, 2016. The act covers both gender and gender identity. In addition to barring pay discrimination for comparable work, the law also bars discrimination in the provision of employment opportunities, such as placing employees in less favorable career tracks and failing to provide information about promotion or career advancement opportunities.

More aggressive state regulation of pay equity is clearly a trend. We believe this represents a stern call to action for employers to review their job and pay structures as well as analyze pay differentials to ensure that they understand their data, with a focus on pay gaps and business-related factors that may or may not explain them. Employers also need to rectify any issues identified. We find that the all-too-common “wait and see” approach is not effective—once a plaintiff knocks on the door, it is too late to craft a story or address gaps in an orderly fashion. 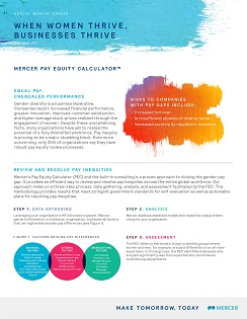 Pay equity in the UK

The United Kingdom is requiring that companies publish data on the aggregate pay gap — that is, the total difference in average pay levels between their female and male workforces—in April 2018. The measure is intended to capture differences in pay within role, but also differences relating to opportunities in their totality (e.g., differences due to women and men occupying positions in different levels of the hierarchy). To accompany this required disclosure, companies are invited to provide a narrative explanation for the calculated pay difference. We are advising companies to do that and to go further—to potentially represent the pay gap, after accounting for legitimate factors through a careful analysis (described below), to discuss other areas of focus and steps being taking to improve outcomes, and to report on such efforts globally.

What your organization can do to address pay equity 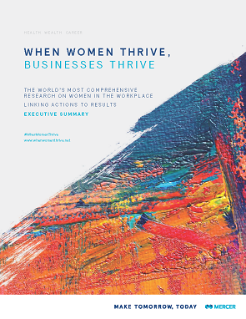